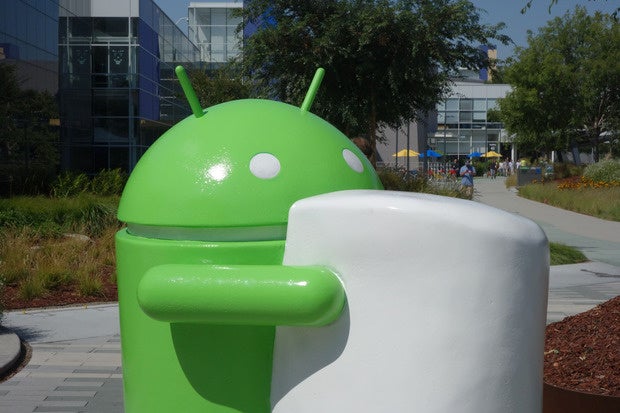 You see, Android updates are a tricky affair. Unless you have a Nexus device, where you get the updates directly from Google, it’s a bit of a slog before you can actually get the latest Android operating system on your phone.

That’s because there’s a process. It’s quickest with unlocked phones, as the manufacturers test the software on their devices, and then will zip it your way when it’s ready. It’s even longer if you have a phone purchased through a carrier. After the manufacturer prepares the software, they have to run it through Verizon, AT&T, T-Mobile, Sprint, or whomever you have service with to incorporate carrier-specific features (and bloatware) and test the new software thoroughly on the network. After some collaboration, the carrier will then approve the update and push it out to your device.

Here’s what we know at this point about when your phone or tablet will get Android Marshmallow. We’ll update our list as the carriers or handset makers detail their plans.

Factory images are here for these Google-branded devices. You can wait for an over-the-air update, or follow our guide to install Marshmallow yourself. However, notice what didn’t make the cut: the Nexus 4, 10, and 2012 version of the Nexus 7. Hey, nothing lasts forever. Here’s the full list:

Also, the OTA updates are on their way. You’ll get a push notification on your Nexus device when it’s ready for you to download. Typically Google sends these out in stages to ensure they don’t wreak any havoc, so it could be several days or even a few weeks before Marshmallow arrives for you.

The OnePlus One and OnePlus 2 will get updated to Marshmallow in the first quarter of 2016, according to a company blog post.

For the OnePlus One, the update will come to the CyanogenOS version—the OxygenOS build is a “community build” that will updated in the future as time allows. In the meantime, OnePlus is focused on updating the OS that the phone came with.

Updates with Samsung are a little harder to nail down because the company sells so many versions of the same phone. So an AT&T Galaxy Note 5 will be on a different update timeframe than a Verizon model. However, it’s a safe bet that the following devices should see Marshmallow at some point. Samsung rolled out Android Lollipop to most editions of the Galaxy S4, so that bodes well for some older devices in terms of eventually getting Marshmallow. However, when you get it will vary widely based on your carrier:

With previous releases, it’s usually taken a few months for Samsung to push out major OS updates—so prepare to be patient. The good news is that all its flagships and many mid-range devices eventually got Lollipop, so even if you don’t have the latest Galaxy smartphone, there’s a great chance you’ll see Marshmallow at some point, even though only high-end devices have been confirmed so far.

The latest device to score Marshmallow is the Moto G – well, at least if you’re in India. However, the company often sends out major updates to its devices overseas before bringing the new software to the U.S. variants. So this tells us some updates for U.S. models may be here soon.

The other major update to hit the airwaves recently was the upgrade to the Moto X Pure Edition. The Marshmallow update has also begun for the 2014 Moto X, so check your settings to see if it’s your turn.

The U.S. version of the 2015 Moto E is still a no go, but international models willget Marshmallow. Such is the world of Android updates.

Here are the other phones Motorola confirmed will get Android 6.0 or above.

Motorola recently added on the original and current-generation Droid Turbo models to the list. However, they have to go through the typically slow Verizon approval process. So don’t count on seeing new software for a few months if you have an older model, or if you just picked up one of Motorola’s new shatterproof phones.

LG’s not-quite-a-Galaxy-Note competitor LG G Stylo got a nice surprise in the form of a Marshmallow update.

Also, the company recently began rolling out the Android Marshmallow update for the G4 in Poland. It followed the same pattern last year with the G3, using Poland as the test market before sending Lollipop to its devices worldwide. LG says close work with Google (likely from the partnership to create the Nexus 5P) enabled the company to get the software ready fast. Along with the G4, we also expect to see the following devices get an update soon:

Keep in mind that many of the U.S. variants of these devices are sold through carriers, so how quickly you get Marshmallow might vary.

Sony makes a lot of different models of phones and tablets. That’s probably why a recent report indicates that some models are skipping Android 5.1 and going straight to Marshmallow. The Xperia Z3+, Z4 Tablet, C4, C5 Ultra, M4 Aqua, and M5 all have Marshmallow pegged as their next update on the Sony support site.

So far, Sony has confirmed the following are on the Marshmallow track: