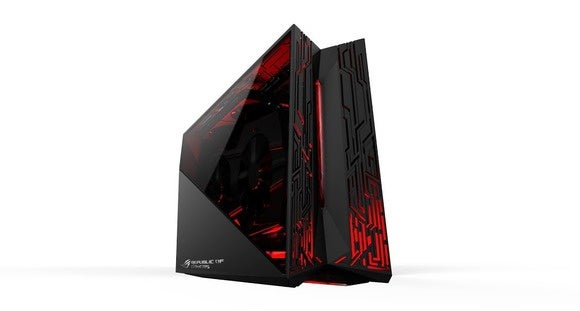 External graphics card docking stations that level up your laptop’s visual prowess are the new black, it seems. While you’ve long been able to jury-rig an external GPU setup to game on game-less notebooks by tapping into a desktop graphics card’s power, commercial solutions are finally starting to gain traction. It all started with Alienware’s Graphics Card Amplifier, which let you turbocharge Alienware laptops with Titan X power. The MSI GS30 Shadow’s claim to fame was a bespoke docking station. Now, at CES 2016, Asus is unveiling its own ROG XG Station 2—the follow-up to an external graphics solution first unveiled in 2007.

Asus’ press release doesn’t reveal much detail about the rig, other than that it exists and utilizes “a custom interface that lets notebooks harness the power of desktop graphics cards to significantly boost gaming performance.” The Alienware Graphics Amplifier and MSI GS30 Shadow each lean on a custom PCI Express connection to allow the docks to communicate with laptops; the ROG XG Station 2, which was “specifically designed for Asus laptops and graphics cards,” presumably uses something similar.

As you can see in the images above, the ROG XG Station 2 takes style cues from Asus’ ROG Gr8 small-form-factor desktops. The docking station will charge your laptop while you’re using it, and you’ll even be able to unplug it while your laptop’s still running, in an interesting feat of technical wizardry.

We’ll be poking around Asus’ CES 2016 suite later this week, and hopefully scrounge up more answers about how this thing works. I’ll be curious to see if these proprietary external graphics solutions have staying power; Intel’s Thunderbolt 3.0 interface delivers enough speed that it’ll be able to enable plug-and-play graphics docks on a more universal level—if Thunderbolt 3 ever becomes somewhat widely adopted, and ifhardware companies create Thunderbolt 3-equipped graphics docks, that is.