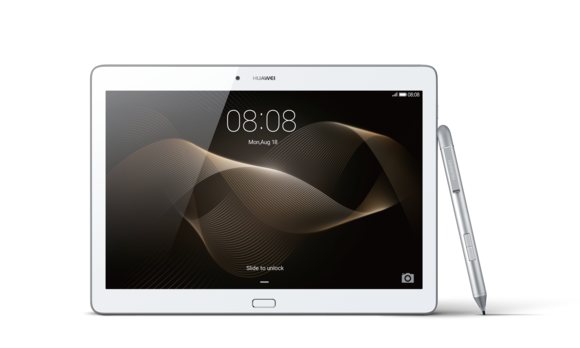 Huawei wants more than just a foothold in the U.S. mobile market—it wants to be seen as a major player in every relevant device category. To that end, the Chinese manufacturer just revealed five new products at CES in Las Vegas, including a gold-colored Nexus 6P smartphone, a premium 10-inch Android tablet, two smaller versions of its recently launched Android Wear watch, and even a mid-range smartphone to boot.

Individually, the devices might not seem like significant product launches. But taken as a collection, these new Huawei devices speak volumes. They’re relatively affordable and come in fancy shells—two qualities that all mobile users crave. Let’s dig in to the details.

A vanity update to the Nexus 6P

First up in Huawei’s list of announcements is a new, fancier version of the pure Android Marshmallow Nexus 6P—our pick for phone of the year. The 6P will be available in gold this month for the same price as its counterparts. The 32GB variant will retail for $500, while the 64GB version will run $550. You can buy the Nexus vanity phone directly from the Google Play Store or at Best Buy.

The Huawei Watch gets smaller

One of our major gripes with the Huawei Watch is that it’s simply too big for some wrists. Huawei’s heeded the call and added a new model catered for smaller wrists—specifically women’s. The Huawei Watch Jewel is rose-gold plated with Swarovski crystals, all of which are tethered to a thinner, 18mm band. There’s also the Huawei Watch Elegant, which sports a more neutral, modern look. Pricing for both watches will be announced later.

Huawei said it wasn’t planning on “reinventing the wheel” for its smartwatch lineup, which is why both the Jewel and Elegant feature the same hardware specifications as the six other models already available for sale.

A mid-tier phone with a high-end look

The GX 8 is another attempt from Huawei to introduce one of its more popular Chinese phones to the U.S. market (its last few attempts came via low-end and mid-tier phones like the P8 Lite). The $350, all-metal device will be available later this quarter with a 5.5-inch TFT display, a 1.5GHz Qualcomm Snapdragon 615, 2GB of RAM, 16GB of storage, a 3000 mAh battery pack, a fingerprint scanner, and an expansion slot. It will also come equipped with a 13-megapixel front-facing shooter and 5-megapixel rear-shooting one.

There haven’t been too many major Android tablet announcements in the past year, but Huawei’s hoping to spark some change with its premium tablet, the all-metal MediaPad N210.

The tablet runs on a 2GHz octa-core Kirin processor with a 6660mAh battery pack. It features a 10-inch, 1080p display with 16:10 aspect ratio, and 2.0 Surround Sound, provided by Harmon Kardon. The N210 also offers four speakers, two on top and two towards the bottom, in an effort to outshine its competitors as entertainment-focused devices.

Huawei’s Wi-Fi only tablet will also be one of its first U.S.-centric devices to prominently feature its proprietary Kirin processor, which will go head-to-head with Samsung’s octa-core 1.9GHz Exynos 5433 processor in its Galaxy Tab S2 devices, and Nvidia’s Tegra X1 in Google’s productivity-focused Pixel C.

The MediaPad N210 will be available later this quarter in two varieties: a silver version with 16GB version and 2GB of RAM, and a gold version with 64GB of storage space and 3GB of RAM. The gold version will also come bundled with a pressure sensitive stylus, and both devices features expansion slots.