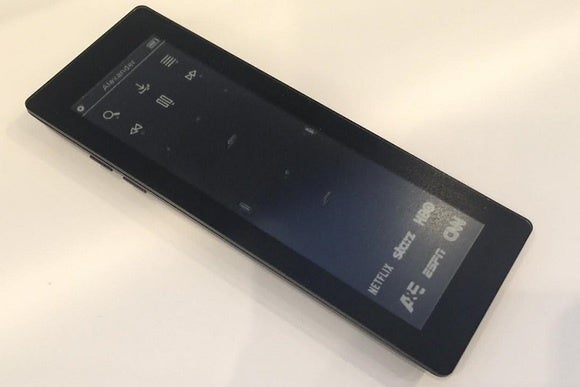 You might never get to use IntuiTV, but that doesn’t mean you can’t appreciate its clever E-Ink remote control.

IntuiTV is a streaming video box from a little-known company called Nagra, combining live TV channels with streaming apps like Netflix in a single, swipe-based interface. But it’s not going to be a consumer product. Instead, the plan is to sell the box to cable, satellite, and telco providers who want to offer streaming versions of their own pay TV services to customers.

The approach is not much different from what Google is pursuing with Android TV, and what Roku is doing with its “Roku Powered” whitelabel set-top boxes. Smart TVs have also been combining live channels and streaming apps into a single interface for years. If anything, IntuiTV is more limited, as it won’t have a full-blown app store. (Nagra will instead let pay TV providers decide which apps to pre-install.)

And yet, during a demo at CES, I was intrigued by IntuiTV’s remote control. Like the latest Apple TV, it uses a touchpad to swipe around the interface. But instead of supplementing the touchpad with physical buttons, IntuiTV’s remote has a low-powered E-Ink display. That means the buttons themselves can change depending on the context.

Given that E-Ink has been around for a while, it’s surprising no one’s done this before. Still, the idea makes a lot of sense. Traditional remotes have so many buttons that they can easily become overwhelming, but media streamer remotes are almost too simplistic.

The idea of customizable shortcuts is especially appealing in the age of streaming apps. Just look at Roku, which ships its media streamers with dedicated buttons for services like Netflix and Amazon Prime. If users don’t like those particular shortcuts—or the app itself ceases to exist—they’re stuck.

So, kudos to Nagra for coming up with a solution. As for whether IntuiTV’s E-Ink remote will see the light of day, that depends on whether pay TV operators are interested in the platform. The idea that a major U.S. provider like Comcast will adopt this system seems like a longshot (though it’s worth noting that Nagra already provides content security solutions for Dish Network).

In the meantime, Sony appears to have greenlit its own universal E-Ink remote through the company’s internal crowdfunding site. It appears to only use buttons instead of swipes, and it’s unclear when the product might launch. Hopefully, someone will bring E-Ink remotes to the devices we actually use before too long.