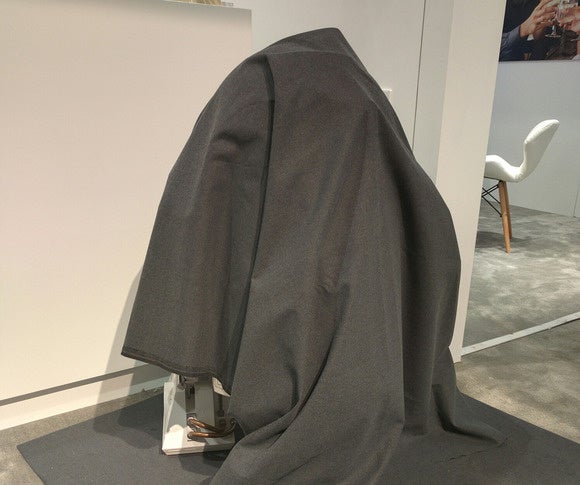 No, the image you see above isn’t R2-D2 wearing a burka. That’s Haier’s R2-D2 Moving Refrigerator unceremoniously draped in a full-body cover-up to keep it hidden from curious eyes at CES 2016.

If you read our CES preview, you know I was looking forward to seeing the astromech service droid at the show. The remote-controlled R2-D2 Moving Refrigerator, first unveiled in Japan in June, is a 1:1 scale model that holds up to six 350 ml cans, emits authentic R2-D2 sound effects, comes with a 720P video projector, and travels at a speed of 1 kilometer per hour.

So, basically, it’s got everything it needs for a big CES media splash. It’s a fully licensed R2 unit. It serves beer. And plays movies. It’s got it all.

But what the R2-D2 Moving Refrigerator doesn’t have, apparently, is Disney’s blessing to immigrate to America, and become a fully naturalized US appliance.

It turns out that it’s a Haier Asia refrigerator. That arm of Haier has the Disney license to show the droid in Asia, but Disney hasn’t given approval for the beer-toting R2-D2 to appear in America. A Haier representative explained this was a very late-breaking development–so late-breaking, apparently, that R2-D2 had already been deployed to the Haier booth.

I arrived at Haier HQ just moments after 10 am on Wednesday morning, right as CES opened its doors. R2-D2 was sitting quite unceremoniously in an out-of-the-way nook, clad in its cloak of huddled-masses shame, but strangely still on public display. Other journalists milled about for the grand unveiling. It was an awkward scene, especially because we could see one of R2-D2’s feet, but couldn’t rescue him from his intellectual property rights-managed exile.

I returned twice throughout the day to see if Disney would grant R2-D2 even a tourist’s visa to conduct a friendship mission on American soil. By 2 pm, I gave up. The R2-D2 Moving Refrigerator remained in zero-power storage mode while other Haier business continued apace around him. He had become by all measures invisible. Just another forgotten face in the immigrant churn.

With any luck, Jawas will claim him for scrap. Or Disney will grant him immigration rights, and he’ll begin delivering beer to rich technocrats in American bro caves. Check back tomorrow. This story isn’t over yet.