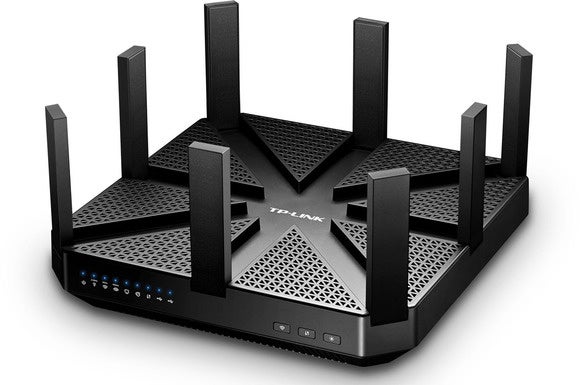 “In the not-too-distant future, tri-band routers (with radios operating on the 2.4GHz, 5GHz, and 60GHz frequency bands) will come to market.” I’m somewhat embarrassed to admit that I wrote those words in May. May of 2013, that is. So much for my ability to prognosticate. Here it is CES 2016, and TP-Link is only just now bringing the first true tri-band router to market. The company expects to ship its Talon AD7200 sometime this spring.

Powered by 802.11ac and 802.11ad chipsets from Qualcomm, the Talon AD7200 can operate three independent Wi-Fi networks: one on the 2.4GHz frequency band, a second on the 5.0GHz band, and a third 802.11ad on the 60GHz band. To date, tri-band routers have supported one network at 2.4GHz and then split the available 5GHz spectrum to operate two additional networks.

The 7200 in the Talon’s name comes from summing the maximum bandwidth that can be supported on each network: 800Mbps on the 2.4GHz band, 1733Mbps on the 5GHz band, and a staggering 4600Mbps on the 60GHz band. Those are theoretical maximums, of course, and real-world performance is likely to be considerably lower. Still, TP-Link says this speed will enable users to download an feature-length 4K movie from the Internet in about four minutes, or transfer 1000 digital photos to a local network storage device in approximately five seconds.

And before you get too excited about the blistering speed of 802.11ad, know that such high-frequency radio waves don’t travel far because they tend to be absorbed by walls. In fact, oxygen moleclues begin to absorb electromagnetic energy frequency.

TP-Link’s press release doesn’t mention this, but I confirmed with a spokesperson at the booth that TP-Link anticipates the reach of router’s 802.11ad network will be limited to the same room where the router is located. Even with that limitation, there are plenty of use cases where 802.11ad’s massive bandwidth would be a boon, such as streaming video from your entertainment center on one side of your home theater to a video projector on the other. Moving that and other bandwidth-intensive tasks off your 802.11ac network would in turn free up bandwidth for applications that do require room-to-room transmission.

TP-Link has not yet decided how to price the Talon AD7200, but it is the only product of its kind for now. On the other hand, 802.11ad’s use case—and its appeal—could be pretty limited until an ecosystem of compatible client-side products come to market. And we won’t really know how well it performs until we get our hands on one. Stay tuned.