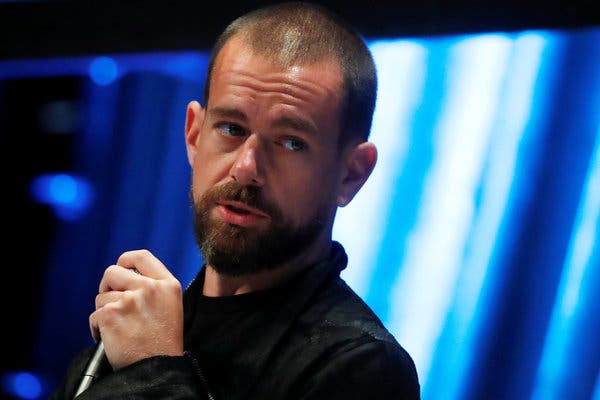 SAN FRANCISCO — It had been eight years since my last interview with Jack Dorsey, the 41-year-old chief executive of Twitter, and he had changed from his start-up days. He now has a long beard with flecks of gray and a wisp of a silver nose ring. Wearing a lush, black cashmere hoodie, black knit pants and black sneakers, he carries a sort of shabby-chic, tech-billionaire style.

My colleague, Kate Conger, and I were invited to interview Mr. Dorsey on Friday, after attending a meeting in which he convened 18 company leaders in a small glass room for a standing-only meeting to hash out a nascent plan to rid the site of “dehumanizing” content, which the room struggled to clearly define.

The invitation came after I had tweeted skeptically earlier in the week about Mr. Dorsey’s explanations for why Twitter had decided to keep posts of Alex Jones, the far-right conspiracy theorist, on the site. One of my criticisms of Twitter and other social media firms was their lack of transparency on how decisions like the one made about Mr. Jones are made.

A Twitter spokesman called to say the company agreed that they needed to be more transparent. So they invited us to be flies on the wall to see how they make policies and to interview Mr. Dorsey.

We knew there was a risk that the meeting might dive deep into the policy weeds and not provide concrete enough plans for change to be relevant to the average reader or Twitter user. But it was also a rare opportunity for us to witness what kinds of conversations take place within the company and spend some time with Mr. Dorsey, a taciturn figure who doesn’t often give interviews. I felt that depicting a policy meeting that didn’t result in substantive changes, which was basically what happened, was in itself revealing about the state of Twitter.

We wanted some clues as to why it’s been so hard for Twitter to rid its site of harassment, misinformation and the promotion of fringe hate groups, and what the company was going to do to address those problems.

At the one-hour afternoon meeting, the conversation got wonky fast. There was a lot of back and forth on basic definitions of “dehumanizing” speech and how it would be policed. How could tweets that described immigrants with obscenities, for example, contribute to violence and hatred toward immigrants in real life? Currently, if someone doesn’t directly level a threat or hate language directly toward a specific individual on Twitter, then it’s hard to take the post or account offline.

The biggest decision to come from the discussion was a plan to draft a policy and open a comment period in the near future.

In many ways, the meeting revealed how far behind the group of Twitter’s top executives and members of its legal and safety teams were and how they may not be prepared to move as quickly as they need to to impose new rules.

Mr. Dorsey, who spoke little during the meeting, paced with his hands alternating from stroking his beard to digging into his pockets. He asked if consequences for dehumanizing content should be a greater priority than other work by the policy team. The ideas, overall, felt iterative and high concept.

I saw the irony in Twitter asking us not to name people on the legal and safety team because they could become the target of threats on the platform. We agreed because of the safety concerns. But it was striking that the company couldn’t protect its own employees on its site — a sign of its difficulty moderating its own platform.

After the meeting, we had about 20 minutes to talk with Mr. Dorsey.

In the interview, I was struck by how much Mr. Dorsey still sounded the same. Eight years ago, we met to talk about his support for an Obama administration plan to promote open access to the internet around the world. Mr. Dorsey was optimistic about how social media platforms would empower the oppressed and challenge authoritarian regimes. He, like many others at the time, imagined social media as a great force for good.

Now, with Twitter and other social media sites under intense pressure for permitting harassment, giving voice to hate groups and spreading misinformation, Mr. Dorsey is rethinking the underlying values of the site.

It isn’t enough to promote free expression, he told me and Kate. He spoke about high-altitude and vague ideas. And when we prodded him on how exactly the site would accomplish these aspirations, he said the site needs to be a healthier and safer environment. But he admitted he hasn’t had “explicit” conversations yet on some of those goals.

When asked about criticism for maintaining most of the posts by Mr. Jones, Mr. Dorsey was philosophical. He had been talking for some time about whether Mr. Jones’s posts violated rules before the blowup over his account in the past week. Still, he emphasized that Twitter would not let public opinion influence its decisions.