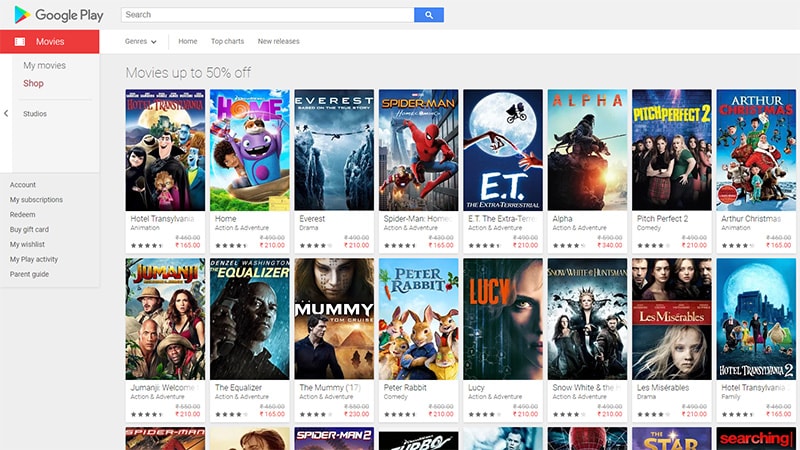 Google Play has deals going across categories this holiday season. There are deals on apps, games, book, comics, movies, and more. Though these deals are meant for your Android devices, audio books, which also have discounts running will also work on the Google Home range of smart speakers. All these promotions are active till January 2, 2019.

Starting with Google Play Movies, the service is offering movie rentals from Rs. 30. Some notable ones are Spider-man Homecoming at Rs. 30, Jumanji: Welcome to the Jungle at Rs. 40, and Alpha at Rs. 45. There are many other films including Christmas-themed ones to select from as well.

If you prefer buying movies over renting Google Play Movies is offering films at up to 50 percent off. This includes all the Spider-man films at Rs. 165 each, Everest, Lucy, Snow White and the Huntsmen at Rs. 210 each, and many more films.

In books there’s a minimum 50 percent discount in select titles across categories. Satya Nadella’s Hit Refresh: A Memoir by Microsoft’s CEO is going for Rs. 304, Thirteen Reasons Why by Jay Asher is selling at Rs. 99, and The Theory of Everything by Stephen Hawking is priced Rs. 69 during discount. This deal is also applicable to comics like Alan Moore’s Watchmen going at Rs. 562.46, Old Man Logan at 342.11, and Deadpool Kills the Marvel Universe at Rs. 136.43.

As we had mentioned earlier, audio books too are included in this sale. Elon Musk by Ashlee Vance can be picked up at Rs. 515, Wonder by RJ Palacio for Rs. 430, and Turtles all the way Down by John Green at Rs. 448, among many other options.

Google Play is also running a promotion of Rs. 200 store credit that can be used for any book you pick up at Rs. 200 or more.

For deals on apps do keep an eye on the top banners of Google Play’s apps section.